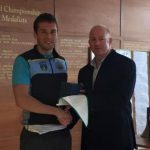 The pinnacle of the Irish collegiate rowing calendar, the University Championships, took place on Saturday at the National Rowing Centre in Cork

For the first time in 17 years, the Wylie Cup has been won by the club