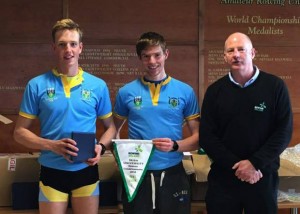 The Novice 8+ won their heat well before the Senior 2- took to the water. UCD’s lightweight combination of David O’Malley and Shane Mulvaney, winners of this event in 2015, again showed their pedigree and finished 6 lengths clear of 2nd place NUIG for UCD’s first win of the day.

Senior 4- was a three boat race between Trinity, UCC and UCD and they were well matched down the main body of the course. UCC began to move in the last 500 taking Trinity with them. The final result was UCC by a canvas over Trinity, with UCD a length back.

Next up was the final of the Novice 8+, with UCD facing the Trinity crew that had beaten them well at Colours a month previously. The work done by the UCD crew and coaches since that race was evident as they finished 2 1/2 lengths behind Trinity, a huge improvement from Colours, and another 2 1/2 lengths clear of 3rd placed Queens. This improvement is a deserved reward for their efforts and we are hoping for more again for this group.

After the lunch break the Novices were in action again, this time in their recently formed quads. UCD B made it through the heat but the more experienced scullers of Queens and DIT were well clear of them.

The final two races of the day for UCD were the Intermediate and Senior 8+ events.

In the Intermediate 8+ event, UCD got off to a good start, keeping with the field of Trinity and UCC while NUIG took an early lead. UCD did not let NUIG get too far away and mounted a late charge to close the gap, but ultimately finished 2nd, 1/2 length back from NUIG, with a further length back to 3rd place UCC.

The UCD Senior 8+ took the initiative in their race and had a length lead over Trinity at 800m gone. They extended that slightly over the middle of the course before the rough water towards the finish began to take effect. Trinity finished well, closing the gap, with the final verdict called at 1/2 length, with 3 lengths back to 3rd placed NUIG. 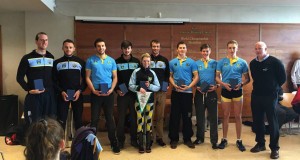 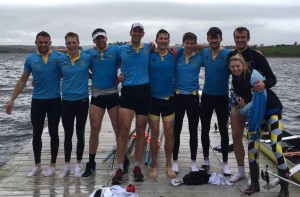 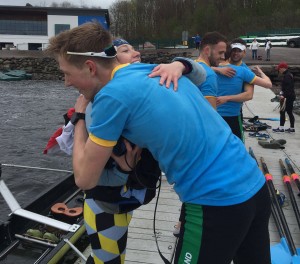 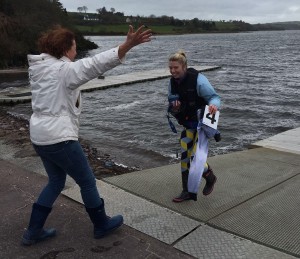 The second last race of the day, the Men’s Senior Eights, battle the rising wind at the University Champs! Well done to winners UCD

Congratulations are due to UCD Ladies Boat Club on their win in the Novice 8+, following up on last weekend’s successes at Neptune and Commercial regatta, while their Club, Intermediate and Senior crews took 2nd place in their events.

Well rowed all college crews and many thanks to alumni, family and friends for their continued support. Sign up to our newsletter for information on upcoming alumni events.