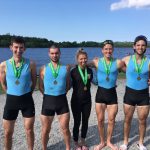 Gold and Silver at U23 World Championships

As one of the few regatta surviving on the calendar after an unfortunate spell of bad weather, Cork was essential for gathering experience and cementing crews for the Championships in a few short weeks.

UCD Boat Club sent 27 athletes over to London last weekend to compete in the London Metropolitan Regatta at Dorney Lake.