UCD came away from this year’s Championships with 3 National titles. It was a successful championship for the women’s team, picking up the Intermediate 8+ and 4+ but a disappointing one for the men’s, with Sean Jacob picking up the only trophy in the Senior 1x. 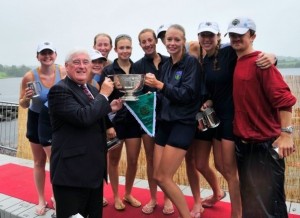 In poor weather conditions the Womens Intermediate 8+ faced a 7-boat straight final in the early afternoon on Saturday. The race began strongly with Trinity, NUIG, Galway RC, UCD and UL all making strong starts. Galway took an early lead but it was short lived as steadily the universities began to edge away. The field slowly inched away from Commercial and Galway and the battle of the universities was on. With Trinity on the outside who were form favourites to lift the Championship, the three universities could not afford to allow Trinity to paddle away uncontested and so UCD pushed to lead into the 1000 meter mark. With half the race over it was a matter of sustaining the challenges from UL and keeping an eye on a strong Trinity crew. With 700 meters to go, UCD made a push to cement their lead and open up the gap against a strong UL crew who were determined not to drop and Trinity who were sitting in third position. In the last 500 meters challenges were sustained, conditions were dealt with and UCD roared over the line to make it two years in a row for the UCD Ladies winning the Intermediate Championship.

The following day the ladies would go one step further in winning the Intermediate 4+. UCD were the last crew to qualify from their heat on Saturday afternoon. Despite this the crew were confident that they had another gear in them and believed they could add to the final. Off the start in the final it became a battle between Tribesmen Rowing Club and UCD. Though Trinity and UL stayed competitive on the other side of the field, UCD were aware that beating Tribesmen Rowing Club was key. Trailing in second place through the 500 meter mark, UCD maintained consistent pressure and denied Tribesmen the comfort of a full boat length lead. With a strong push, UCD then moved forward breaking Tribesmen and achieving the lead with 700 meters to go, crossing the line with clear water over the rest of the field.
Women’s Intermediate 4+ Champions 2009: Roisin Harkin (Bow), Jenni Monahan (2), Kayle Shapero (3), Claire Lambe (Stroke) and Eoin Craven (Cox).

Last but by no means least the club would like to thank Mr. Martin Feeley for his commitment to the ladies cause this year. It was a tough job to take on and he was very brave to do it. It could not be done without him and the effect he had on the club in such a short space of time will forever be commemorated by this grand achievement.