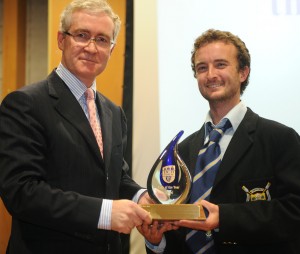 UCD Boat Club picked up the “UCD Elite Club of the Year” Trophy at this year’s Sports Achievements Awards. The new trophy was awarded by UCD President Dr. Hugh Brady to club captain Naoise Grisewood, who had already picked up a “President’s Award for Excellence in Student Activities” earlier in the year for his administrative work with the Boat Club. This is the 2nd year in a row that the Boat Club has received one of the top Club awards from the college, after Jason Brooke received the Club Administrator of the Year Award” in 2008.