Entries in the Lightweight Mens 2- meant that only 1st place in the heats would go straight to the A final with the others going to the repechage. Ireland finished 2nd in their heat behind eventual gold medalists Italy but won their rep well to progress. The final was a tight and tense affair with Turkey taking an early lead but Italy and Ireland were level with them by 1500m. From there Italy pulled ahead to win with Turkey just pipping Ireland into 3rd.

The Lightweight Mens 4x got the perfect start by winning their heat and finishing strongly in their semifinal to place 3rd and book a place in the A final. They got off to a steady start in the final, moved into 3rd in the middle of the course and finished very well again, almost closing the gap on Austria in 2nd but finishing 3rd, 1.75 seconds off the Swiss in 1st.

Well done to all athletes! Full results and videos are available here. 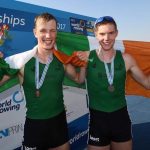 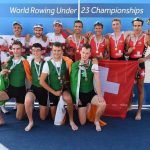