The Gannon Cup saw a great performance from UCD where they led from the start against the heavier Trinity crew into a strong headwind. It means 9 of the last 10 Gannon Cups have gone to UCD and the gap in the overall standings is now 4 (Trinity with 36 wins to UCD’s 32, and one dead heat).

The Corcoran Cup was a different race with Trinity taking the lead early on but UCD continued to push and as they closed in during the latter stages Trinity encountered steering difficulties that effectively ended the contest – UCD went on to win easily.

The Novice races saw a fine battle for the Dan Quinn Shield – UCD got off to a good start and an early lead but a crab slowed their boat and Trinity took an advantage that they held on to until the finish. In the Sally Moorhead Trophy there was debate over the arch taken by UCD at Capel Street Bridge (unfortunately stations were not marked on a number of bridges) but umpire Jim Cassidy was satisfied that the result was fair, with UCD winning easily in the end.

In the Reserves races, UCD had a convincing win in the Senior Men “Naggon Cup” race with Trinity winning both the Novice Men “Goonan Cup” in a well contested race and Novice Women “Goonette Cup” easily.

UCD Ladies Boat Club on Instagram: “Amazing win yesterday for both Senior and Novice crews, reclaiming the Sallymoorhead trophy and the Corcoran cup. Can we please appreciate…” 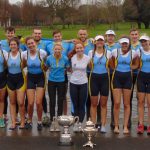 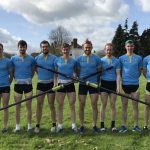 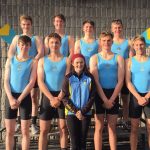 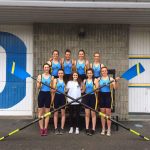