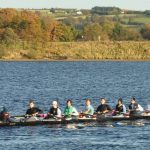 UCD BC results at Trinity Regatta

UCD BC and Ad Astra Elite Athlete Paul O’Donovan clinched a bronze in the LM1x final at the Memorial Paolo d’Aloja regatta in Italy on Saturday 12th April. Paul produced a great performance to work his way into the medals, having trailed the field 500m into the race. It was  an exceptional turnaround against some very […]

UCD BC and Ad Astra Elite Athletes Niall Kenny and Paul O’Donovan recorded strong results at the Rowing Ireland trials at the National Rowing Centre in Cork last weekend, 28th-30th March. After a series of trials over the weekend, Niall was selected to race the final trial on Sunday in the LM2- with Mark O’Donovan […]