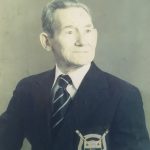 Billy Bass served as UCD's Boatman from 1932 to 1977 and was a constant presence in the Boathouse during those times.

Billy Bass to bow out as boatman

BILLY Bass, the 70-year-old ex-army man who has spent 51 years on the river, is finally retiring as boatman with University College, Dublin, having "rowed in" with them in 1932 with two Fours, "Miss Newark" and "Miss Ierne", and a clinker eight "L'Esperance", when Professor Jim Meenan was in his second year of captaincy.

As a reward and recognition of his 45 years service, the Old Collegians Boat Club is setting up a retirement fund for Billy, with a presentation dinner taking place at Newman House, St. Stephen's Green, on March 19th.

Billy, first introduced to the rowing atmosphere by his dad, Billy senior, when he was boatman with Trinity, admits "I will miss the life on the river. It's hard to stand down but I will still keep in touch."

"In my 45 years the college club has won many trophies and championships and produced fine oarsmen. Many have become eminent in their professions and I have the honour to count them as my friends. A great number still come and visit me and at Christmas time or send me greeting cards. I have tins and boxes crammed with them from all parts of the world."

"A macabre aspect of my life on the river was the finding and recovery of many bodies from the river over the years. At first it was horrid but then I got used to these situations".

The span that Billy experienced, in which he has seen boats going faster and faster with improved technique and modern materials, has naturally seen the cost of the sport soaring.

Bass, who served under five Presidents of the university, Dr. Denis Coffey, Dr. Conway,
Dr. Tierney, Professor Hogan, and Dr. Murphy, has had many thrills during his career.

The biggest one for him came in 1959 at the Limerick regatta when the college eight beat the famous and until then the invincible German crew, Frankfurt.

But also high up in his memory was the visit to Chester in 1939 when his crew won the senior eights in the North of England championships and in 1961 at Henley when the college crew, using spade blades which had arrived in Ireland for the first time, gave a tremendous performance in holding the famous Kent school to three quarters of a length.

With the outbreak of the last war Billy's rowing activities had to be adjusted but he still found work to do and along with Professor Meenan cleared the weir on the Liffey and the bridges down river of all obstacles which was the spade work for the establishment of Head of the River race.