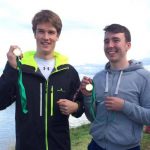 Our Novice men were in action at Portadown Regatta this weekend, taking part in Club 1 8+, Novice 4x+ and Novice 2x.

The Club 1 8+ was ahead in their semi-final by 2 lengths until a late crab gave the advantage to Methodist College who came through to win.

The Novice 4x+ had similar misfortune late in their semi-final against Portadown, snapping an oar.

The Novice 2x had a better day, winning both their semi-final against Bann and final against Portadown by a distance.