It was an Irish Championships like no other at The National Rowing Centre in Cork. On Sunday evening, the club left with 48 tankards and 6 national titles. Quite possibly the most successful weekend at the Irish Rowing championship in the club’s history.

The success began on Friday with the Intermediate 8+ coming out on top after a great matchup against Trinity. The boys took an early lead from the beginning with the aid of a tremendous push at the 750m mark. The 8+ increased their lead in the following 1000 metres to secure the clubs first intermediate 8+ National title since 2018. 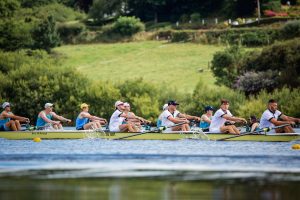 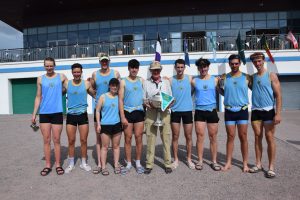 Not too long after the success of the 8+ followed a win in the Club 4+ final. A dramatic race included a comeback through the 1000m mark. The race showed great determination to take the lead back from Trinity in an outstanding race from all crews. Two National Titles in the space of 1 hour.

Momentum was carried throughout the squad into Saturday afternoon when our novice 4X+ were matched up against a yet unchallenged field. There was an uncertainty amongst the crowd about whom would triumph. After narrowly losing out on a championship win in 2021, there was a certain determination amidst the UCD lads. The field composed of UCD, Commercial, Queens and Neptune. From the start UCD lead the charge. With a slight push from Queens, the UCD lads stayed composed and only increased the water between stern and bow. By the 1500m UCD controlled their lead by an appreciable amount. The first novice quad championship title in the clubs history was secured.

There was only one thought on the minds of 36 UCD athletes the morning of July 17th 2022, four simple words. “Four out of four”.

Club 8+ was the first hurdle of the day, and with a cancellation in the semi final, a straight final was announced over the speakers leaving all crews having to mentally prepare for a six lane straight final. Over the first 500m there was nothing to separate UCD from a strong, sharp Trinity crew. Only after 600m was the first sign of a lead exposed. Inch by inch, seat by seat, UCD took  more and more of an  obvious lead. With both crews making a push around the 1000m, it was clear who the faster crew was. UCD held out for the first win of the day. Two down two to go. 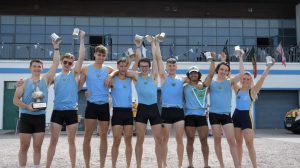 Next up was the novice 8+. The season up to this point was full of mixed emotions. With a loss in the Dan Quinn Shield and a win at University Championships, it was all to play for in the final match up of the year.

Off the blocks it was dead even until the 200m mark when UCD took a canvas from Trinity. The lead didn’t escape Trinity until the 1000m when UCD made a dramatic push which left Trinity with a difficult task of responding. Over the following 1000m the UCD 8+ only increased the water between the two crews and crossed the line two and a half lengths ahead of Trinity. One more to go… 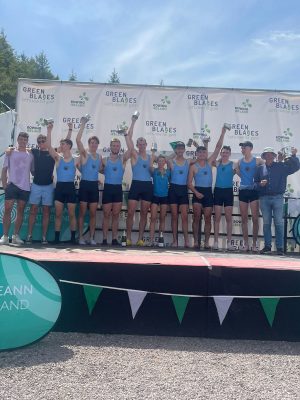 There’s a saying in Germany, “If the eight is going well, all is good in German rowing.” This mentality was carbon-copied among the UCD squad on the weekend of the Irish Rowing Championships 2022.  After a 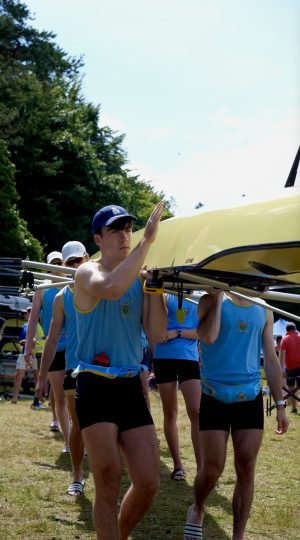 well anticipated day the big finale was finally among us, senior eights. There’s no doubt that the eight is the pinnacle of Irish rowing. Seat race after seat race, session after session, sacrifice after sacrifice. A year of training for six minutes to prove yourself and eight others worthy to lift “The Big Pot” and to hold the title  “Senior Eight Champion”. Without a doubt, this was the race of the year.

UCD lined up in lane 1 alongside a familiar and proven UCD Club 8+ to their left, strong experienced Cork Boat Club eight, a Shandon/UCC composite and Trinity. Off the blocks, UCD proved to contain a strong start as well as Cork. Nothing separated the 16 men until the 700m when UCD made a substantial push which moved  the Cork bow-ball  in front of the UCD bowman. Meter by meter, that bow-ball pushed further and further past each UCD man until the 1200m when the UCD cox glanced to her right and called for clearwater. This lead increased ever so slightly however, when at the 1500m Cork made a strong push for a final throw of the dice but UCD responded and held out for a third consecutive senior eight win. Four out of four… job done. 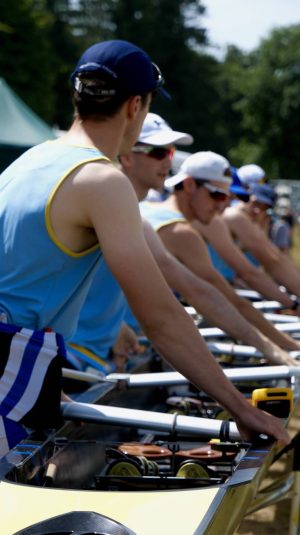 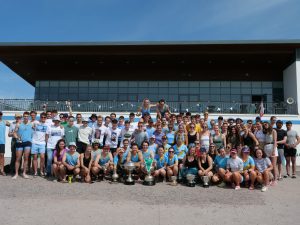