The season began with a massive turnover in the squad – 14 athletes that competed for UCD at the 2017 Championships would not do so in 2018, although the addition of freshmen Juniors and the previous year’s Novices, hungry to prove themselves among the remaining squad, provided hope for the future. The successful development of this raw and mixed squad was down to the dedication and commitment of the brand new coaching line which combined experience, passion and a new level of precise programming from Martin Feeley, Giuseppe De Vita and Niall Farrell. Barry O’Connor continued coaching the Novice squad and was joined by Mark McShane, Brian Reilly and Dualtach MacColgain to great effect.

An unwavering commitment to the program, the coaches and each other saw every member of the squad individually and collectively develop as the season unfolded.

The squad arrived to the National Rowing Centre on the Tuesday evening, hoping to settle in the location they would be racing at later in the week. With no stone left unturned and full confidence in the program, heads were held high during the count down to the first day’s racing.

The first race was the Mens Intermediate 4+ where a comfortable heat for both the A and B crew saw them into the final that afternoon. The main competition would be a very strong Cork Boat Club crew, fresh from forming part of a Thames Challenge Cup 8+ at Henley. Cork raced with power and heart and managed to fend off the relentless pushes from the UCD A crew who finished in a very respectable 3rd place. 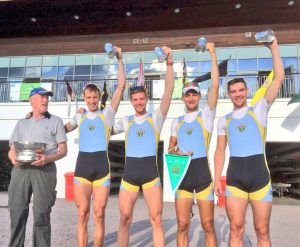 UCD’s four bronze medalists at the 2017 World Rowing U23 Championships joined forces for the Mens Senior 4- where they displayed their talent to take a length lead by 1000m and build on it to the finish – a monumental achievement to bring home the Senior 4- title for only the 2nd time in the club’s history.

The evening began with a solid win in the heat for the Mens Club 8+ giving them the second fastest time of all 3 heats. The final was a nerve-wracking experience for the whole club as this crew, containing four men who took up the sport with UCD last season, had captured College hearts with their positivity, determination and remarkable development. A strong start from Trinity put UCD under pressure early on in the race but they kept their speed and came out of the 1250m ahead of Trinity and level with UCC. UCC and UCD had fine battles during the season in this event but UCC were able to bolster their crew with a couple of changes including an athlete selected for the 2018 World Rowing U23 Championships. Despite this the UCD crew threw everything they had at UCC all the way to the line and finished with nothing left in the tank. An amazing performance but gutting 2nd place by one third of a length left the entire club with lumps in their throats. The race galvanised the club with everyone proud to call each man in the boat a squad-mate, sharing in their disappointment and taking inspiration for the races to come. 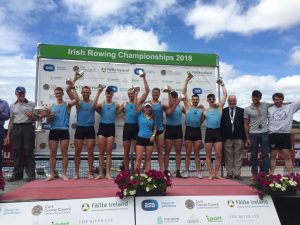 Full of motivation from the previous day’s racing the Mens Intermediate 8+ lined up for their straight final against 5 strong crews including Henley competitors Trinity and Cork Boat Club. Knowing the first 1000m would be blistering from the competition, UCD were out of the blocks like bats out of hell, reaching the 500m first and in a time of 1:22.5. They managed to hold on to the early lead all the way to the finish, fending off attacks from other crews and taking home the Intermediate 8+ title for the second year in a row, with a fresh lineup. The entire club celebrated, welcoming the boat on the slip with pride for the whole squad who were very much part of the win. 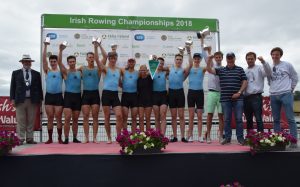 Later that evening the Mens Novice 8+ took to the water. With an impressive record all season they sought to complete the triple of Colours (Dan Quinn Shield), University Championships and National Championships. The UCD boys once again proved strong, with just under a length lead over Trinity by 1000m with Queens another length back. They were able to hold off Trinity’s advances in the second half of the race and secured the Novice title for UCD for the first time since 2014. We hope to see them step up the grades over the coming seasons.

The Mens Senior 2- was unfortunately not raced as UCD’s combination of David O’Malley and Shane Mulvaney, who put in a very strong performance at Cork Regatta, were the only crew to declare.

In Womens Novice 8+ UCD Ladies Boat Club put in an incredibly brave performance, leading from the start in a two boat race with Queens, pushing hard down the course and holding a one length lead to 1500m. Unfortunately they had given their all and could not maintain their speed for the final 500m with Queens gradually catching them and crossing the line first.

Mens Intermediate 1x had two UCD entries with Coman O’Connell finishing 4th in a fast heat while Thomas Earley followed up his Intermediate 8+ win earlier in the day by finishing 1st in his heat. His exertions caught up with him by the semi-final however, where he finished 6th.

The final day kicked off with Mens Club 4+ where UCD were unfortunate to draw the strongest heat possible. Despite posting a time quick enough to win any of the other three heats well, UCD finished 4th in theirs and were eliminated. It was a disappointing finish for a crew that has looked strong at every test this season but again, with three rowers on board who took up the sport with UCD last season, hopefully just the beginning.

Niall Herlihy was UCD’s entry in Mens Lightweight 1x, finishing 3rd in his heat to qualify for the final. Given his commitment to sweep boats during the year, earning him a seat in the Intermediate 8+, it was no surprise that the final was too quick and he finished 6th.

Womens Club 8+ saw UCD Ladies Boat Club take the initiative in a tricky 4 boat heat with 2 to qualify, leading at 500m. The Cork and Galway crews gradually reeled them in, however, and they finished 3rd. It was a difficult year for this young crew but they showed plenty of promise for the future under the watchful eye of coach Tom Sullivan.

The evening saw the blue ribbon event of the whole weekend, Mens Senior 8+. The late addition of UCD’s 2018 U23 selected lightweights (with the Senior 2- not being raced and Andrew Goff racing the 8+ instead of Lightweight 1x), who had been training in Cork, meant the crew was a wild card in the event. With minimal time together the crew set out to make history by winning the Senior 8+ for just the 2nd time in over 40 years. As expected in the first 1000m there was no way of calling it between the favourites and it wasn’t until the final 500m that Commercial and UCD emerged from the pack. The experienced Commercial crew managed to eke out a canvas lead and maintain it to the finish. UCD finished 2nd by a mere 0.6 of a second, an amazing performance put in by a young crew who can hold their heads high, take these lessons and build on them for the years to come. This is unlikely to be the last we see of this crew.

Despite the massive change in the squad at the start of the year, the 2018 National Championships was the most successful in years and the closest UCD have ever been to a record breaking clean sweep of the four 8+ events. Thanks to an amazing effort put in by the coaches, the cooperation and belief of the squad and the support provided by our committees, alumni, UCD Sport, KPMG and Bank of Ireland. We look forward to what next season holds for a hungry and determined squad! 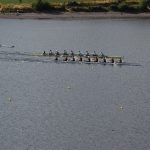 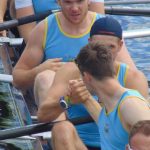 Intermediate 8+ before their race 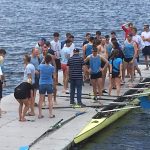 Intermediate 8+ greeted on the slip 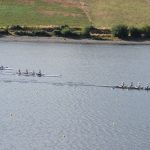 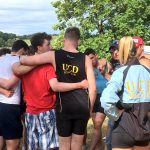 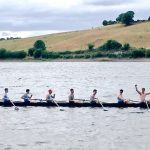 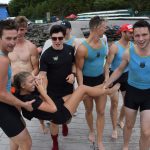 Novice 8+ cox going for a swim 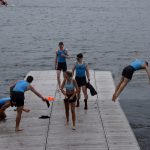 Novice 8+ take to the water 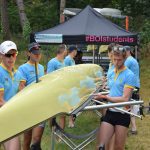 UCD Senior 8+ on their way to the race 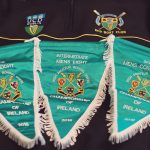