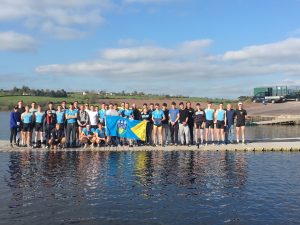 The Wylie Cup is the longest contested and most prestigious trophy in Irish Universities rowing, having been first presented in 1922, and this win is UCD’s 19th.

UCD’s first action of the day was the Mens Intermediate 1x where Ad Astra scholar Andrew Goff easily came through the heats and was the clear winner in the final, over 10 seconds clear of 2nd placed Ronan Byrne of UCC.

In the Mens Novice 8+, UCD had two crews who were unfortunate to meet each other in the heats. UCD A progressed behind Trinity but UCC took the 3rd qualifying place ahead of UCD B. The final was fiercely contested between Trinity and Queens with Queens winning it by 0.8 seconds and UCD finishing 3rd.

NUIG took a slight early lead in the Mens Club 8+, fending off pushes from UCD and Trinity down the course. UCD continued to attack into the last 500m, pulling away from Trinity but NUIG were able to respond and won by a length over UCD, with Queens and Trinity a further length and a half back.

The Mens Intermediate 8+ saw UCD go up against NUIG, Trinity and Queens. The College crew took control with a clean and sharp start that gave them a clear water by 500m and they would not be caught, finishing 10 seconds clear of 2nd placed NUIG, with Queens and Trinity a further length back.

The Mens Novice 4x+ saw our Novices gain some sculling race experience but the A crew from Queens won well.

Last race of the day for the club was the Mens Senior 8+, an event that UCD won last year, lining up this time against NUIG and Trinity. It was the first time since the Gannon Cup that the Senior crews from UCD and Trinity had met and the result remained the same with UCD taking an early lead that they held on to over the course of the race, finishing 2 lengths ahead of Trinity with NUIG another 3 lengths back.

UCD Ladies Boat Club had a very successful day’s racing at Senior level, winning every event (Senior 8+, Senior 4- and Senior 2-) while their Novices were 2nd in the Novice 8+ and Novice 4x+. 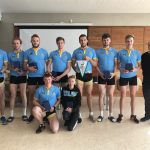 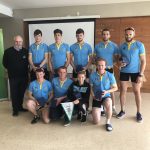 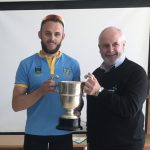 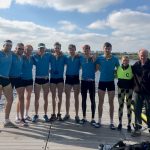 UCD Senior 8+ on the slip after their victory 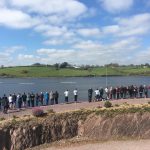