The regatta followed the Grand League format and was spread over Saturday and Sunday with UCD in action over a number of categories.

UCD’s first race on Saturday was the Mens Senior 2-, with race doubling as a selection trial for the national squad. Unfortunately the UCD combination of David O’Malley and Shane Mulvaney was forced to withdraw due to illness.

Mens Novice 8+ saw two UCD crews qualify for the Division 2 A Final which saw a fine battle between UCD A and Queens. UCD A got off to a flying start taking a quarter of length lead early and pushing it out to 3/4 length by 750m. However Queens held their nerve and their fitness saw them pull level before moving away in the last 500m, winning by 3 1/2 lengths with UCD A in 2nd and UCD B in 5th.

The UCD Mens Intermediate 4+ was next, finishing well clear in their heat to book an A final spot where they lined up alongside Senior crews from NUIG and Castleconnell/St Michaels, Intermediate crews from NUIG and Skibbereen and a Junior crew from Enniskillen Royal School. Despite the grades, it was the Enniskillen crew that set the early pace with UCD and the Senior crews in pursuit. They were able to hold on their advantage all the way down the course with UCD’s charge to the line taking them past the NUIG Senior 4+ to finish 2nd, 2 seconds behind Enniskillen, but well clear of the other Intermediate entries.

In the Mens Senior 4x, Paul O’Donovan joined up with his hometown club Skibbereen and they showed their speed, finishing 19 seconds clear of 2nd placed Commercial.

The first UCD action on Sunday was from Paul O’Donovan as he joined up with his brother Gary in the Mens Senior 2x. They faced stiff competition from their Senior 4x partners from Skibbereen and had to come from behind to win by 1.6 seconds.

Our Novices competed in Mens Novice 4x+ but did not progress through the heats.

Mens Division 1 8+ saw no fewer than four UCD Eights on the startlist with our Novices competing in Mens Club 1 8+ for some more racing experience. UCD’s two Club 1 Eights lined up alongside our Mens Intermediate 8+ in Heat B. The Intermediate 8+ won the heat with the Club 1 A crew finishing 3rd, 2 seconds behind the Commercial Intermediate crew, but just missing out on an A Final spot. In Heat A UCD’s Mens Senior 8+ faced off against reigning Irish champions Commercial, getting off to a fantastic start and clear water lead before conserving their energy for the final.

The A final again saw the UCD Senior 8+ take an early lead, holding 1/2 length over Commercial to 750m before stepping it out to a length by 1500m. However, Commercial were determined and battled hard to the line, eventually finishing 3/4 length down on UCD. The UCD Intermediate 8+ had held Commercial’s Seniors to a length over the first half of the course before they began to move. In the end they finished 3rd overall, 10 seconds back on Commercial’s Seniors and 7 seconds clear of Commercial’s Intermediates, to win their category while also beating the Senior crew from NUIG into 4th.

In the B final the Club 1 8+ could not match their heat performance but still performed strongly against a mixed field of Club, Intermediate and Senior crews. They finished 5th in the race for 2nd in their category. 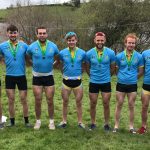 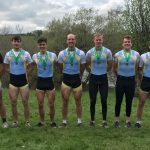 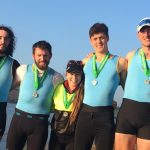