The Senior 8+ spent the weekend in Blessington to prepare for next week’s University Championships but the rest of the crews were in action across the weekend.

First up was Mens Novice 8+. UCD B beat Trinity B in their heat but were knocked out by Trinity A in the next round. UCD A beat Trinity C to meet Trinity A in the final. It was an excellent race with both crews putting up a fight but in the end Trinity were disqualified for crossing a buoy earlier in the race.

Mens Intermediate 4+ was set for Trinity A vs UCD A and Trinity B vs UCD B in the semi-finals but Trinity A scratched giving one UCD crew a rowover. UCD B took an early lead in their semi-final and continued to build on it, safely progressing to a final against UCD A. With bragging rights on the line the final was fiercely competitive. There was a minor clash of blades off the start as UCD A got off to the faster start but they could never break contact with UCD B who had the advantage of the Garda bend and made the most of it by drawing back level. UCD B built on that momentum, increasing the rate over the final part of the course to finish a length up on UCD A.

The Mens Club 8+ had a rowover in their first heat but were beaten by 2 1/2 lengths by Trinity in the semi-final.

Mens Senior 8+ saw UCD’s Intermediate crew take on Trinity’s Gannon Cup combination. Trinity’s Colours preparation stood to them as they made a very quick start against a UCD crew racing their first regatta of the season. Trinity were a length up coming into Garda bend, which was in their favour, but they could not take further advantage as UCD battled hard. As the crews lined back up on the straight UCD began to push as Trinity faded. The margin was quickly being eaten up but the line came too soon with the final verdict Trinity by half a canvas. A narrow miss but great motivation for the coming season. 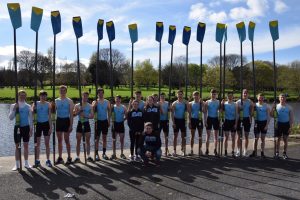 Both UCD crews had more racing in Sunday’s Mens Novice 8+. UCD B beat Commercial/DIT and had a rowover against Trinity B while UCD A beat Trinity A to set up an all UCD final, where UCD A were the winners.

The Mens Novice 4x+ also raced but were beaten by Commercial/DIT.

The Mens Club 8+ was a positive performance, improving on their Neptune Regatta outing but Trinity were the winners by 1 1/2 lengths.