20 Novices and 30 Club, Inter and Senior athletes made the journey and were met with ideal weather conditions for 10 days of intense training, with two to three sessions per day. The centre used by the club sits on a 6.5km stretch of the Alfonso XIII Canal (off the Guadalquivir River) and includes a hotel, gym and boat slipping/storage facilities.

UCD Boat Club have traveled to Seville in January for a number of years and this year other Irish university clubs followed suit with NUIG and Queens University Belfast making the trip. Rowing Ireland’s high performance group also returned to Seville, having spent a number of weeks there last season in the run-up to their successful Rio 2016 campaign.

It is also popular with British clubs and UCD took the opportunity to gauge their speed on the water with sessions alongside Durham University Boat Club, Cambridge University Lightweight Rowing Club and Upper Thames Rowing Club.

Many thanks to the committee and coaches who make this trip possible and the athletes for their hard work during the camp.

Highlights from our winter training camp in Seville, January 2017. https://ucdbc.ie/50-athletes-take-part-seville-training-camp/ A big thank you to KPMG and Bank of Ireland, Montrose for their support. 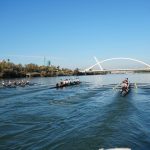 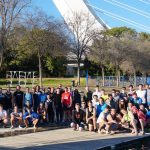