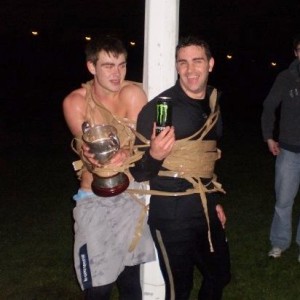 With the Christmas exams ending, it could only mean one thing – the time of the notorious Butler Cup had arrived. All other Islandbridge clubs looked on in awe as our new Novices, fueled by the all day free food & drink, laid siege to the river and tested their mettle in a formidable battle of skill & cunning. With the rules of this heroic event clearly allowing for assault, battery, boarding parties… in fact anything at all in order to cross the finishing line ahead, it was always going to be a closely fought battle and in the end, only two could emerge victorious – John Jordan and Dave Mallon. Their names will now forever be enshrined in UCD Boat Club history as the winners of the 2008 trophy.
Then with the traditional “Tying of the Winners to the Pole and Laughing at Them” ceremony complete and the Cheese, Ketchup & Onion-Eating champions decided, it was time to begin the drunken, meandering, almost kamikaze, adventure across town to the Boat Club’s pub of choice, where new members to the club faced yet another Boat Club challenge, that of Island-Hopping. It was a brave and admirable attempt by the new generation of UCDBC members, but was deemed by all to be thwarted by a certain Novice Lady, who decided that a faceplant into the water would be a better idea. With one falling, it was not long before the whole collapsed. The record of 24 remains…

Aside for a peculiar and lingering smell akin to burnt hair, outside the pub door, thankfully nothing else is recalled of the night which followed.