The club recently congratulated Martin McElroy, ex-UCD and Coach of the British 8+ that won Gold at the Sydney Olympics.

Heartiest congratulations. A magnificent achievement. Well done to yourself and all involved. It was tremendous to see the way your crew developed and raced brilliant (for once we were all cheering the English) Hope to see you some time if you are over.
Best Regards from all at UCD Boat Club
Jaye Renehan 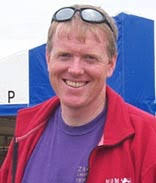 His reply is below.

Thank you for your message. I am not sure its all sunk in yet. I still stop and ask myself did it all really happen. It has been such a long slog with many ups and downs along the way. In the weeks leading up to the regatta we were going ok but not spectacularly. The first race lacked aggression, but that served as a wake up call and then it began to get better and better. By the saturday it was going very quickly and I wanted the race to happen then. Waiting the next 24 hours was agonising.

The race itself was ideal. We knew our best chance was to really take it on. So many olympic finals have been won in the eights by the crew that gets stuck in right from the off. Mind you, I still couldn’t believe how much damage we did in the early part of the race. The final 1000m was nail biting. I was expecting the field to close up but its still difficult to get past at that level. The guys knew that they would have to visit places that they maybe had never been before and I was very pleased with their commitment.

I’m hoping to organise a trip home shortly. If I can get enough time it would be nice to visit the club and remember where it all started.